The Airborne Standby Program was started in response to a customer survey in order to decrease our response times to the scene. It has been received with an overwhelming positive response and has decreased our response time by 40% to the trial agencies in the eastern corridor.

How does it work?

On your request for an Airborne Standby, AIRLIFE will lift and fly in the general location of the scene. We will await further direction from the agency. If we are nearing the location and have not yet received direction, we will circle one to two miles out from the scene until we receive either a "GO" or a "STAND-DOWN". If the call is made a "GO," AIRLIFE Dispatch will request coordinates and a ground contact at that time.

Who gets charged if the call is Stood-down?

No one. AIRLIFE will turn around and return to base with no charge to either the patient or the referring agency.

We have found that we are often very close to the scene when we are made a "Chopper Go," and are overhead much sooner than the receiving agency expects. We request that you continue to take the time to make careful Landing Zone preparations; we will circle until you are ready for us to land. 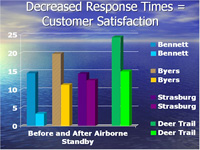 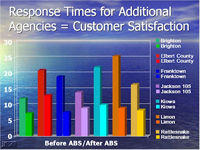