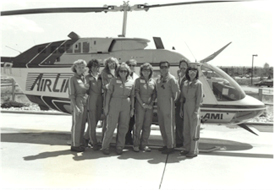 AirLife made its maiden flight on May 9, 1983 to Durango, Colorado in a Bell 206 Long Ranger helicopter. In its first year of service, AirLife completed 207 missions.

The following year, 1984, was also a significant year for AirLife as a second helicopter and a plane were added to the service. The high risk OB team was started and the AirLife communications center began operations. The first Double "Chopper Go" occurred on July 4, 1984 in response to a motor vehicle accident.

In 1985 AirLife flew their first international mission to Mexico to transport a Denver native with congestive heart failure back home. By 1986 AirLife had completed 2000 missions.

In 1989 the Intra-Aortic Balloon Pump team was established. The neonatal team was added in 1991 and pediatric transport services were enhanced in 1992. In 1997 AirLife put two new Bell 407 helicopters into service.

May of 2012 our Cheyenne, WY base was opened at the Cheyenne Medical Center. In 2015 our Hugo, CO helicopter base located at Lincoln Community Hospital was opened.

AirLife opened its fifth dedicated helicopter base in May of 2017 at Melissa Memorial Hospital in Holyoke, Colorado. With the addition of this base, we also added a dedicated spare helicopter to help support our maintenance team and service area.

Since 1983, AirLife has completed over 65,000 transports and reached over 35 years of excellent medical transport service to the Rocky Mountains and surrounding regions.